The Legend of Chaco Canyon 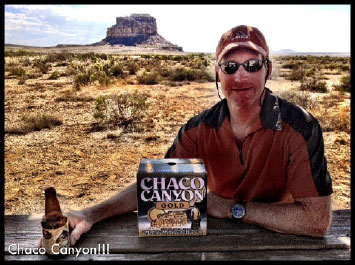 Honey Gold is one of our oldest recipes – it has been in production since we opened our doors in March of 1990. Head Brewer Rich Chapin, having spent some formative years in British Columbia, discovered Canadians brewing lovely golden ales that were much more flavorful and satisfying than the near colorless and flavorless lagers enjoyed on our side of the frontier. Having found his inspiration, he quickly set out to formulate a recipe of his own.

Over the years both the recipe and the name have been revised to better suit our liking. The original Gold Ale recipe contained no honey and was named LouGales Gold after Lou and Gale Shields, (the original owners of our building in the Haymarket). In 1997 the beer was renamed Shooting Star Honey Gold Ale and the recipe was revised to include honey, an ingredient we can source locally that adds an appetizing aroma and dry mouth-feel, to better balance the beer. The name was modified a third time in 1999 to Chaco Canyon Gold and we began bottling the beer.

Chaco Canyon is a region in New Mexico where a thousand years ago a thriving culture of sun-worshiping natives arose. We felt linking our original American gold ale together with the original American astronomers, the Chaco people, made for a great story and strong branding in line with our other Empyrean beers.

Chaco has always been our best seller at Lazlo’s Brewery & Grill due to its approachable pale-golden hue and the incredible flavor balance between sweet malt and honey and crisp, citrusy hops. A pleaser of all palates, Chaco Canyon is tasty enough for the aficionado but easy-drinking enough for the novice. It’s flavors and aromas make it a natural to pair with our hickory-grilled chicken, cheese-centric dishes and fried appetizers.