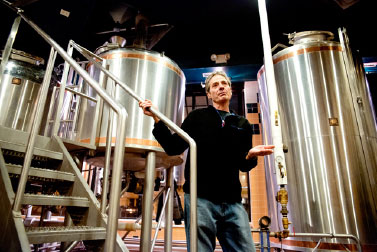 Homebrew hobbyist Rich Chapin was working the corporate grind as a stockbroker when owners of Empyrean Brewing Co. invited him to lead their brewing operations more than 20 years ago. Since then, he has brewed over 180 different types of beer and helped the brand grow from a small brewpub serving beer by the pint to a packaging, multistate distribution company. Passionate about the exploration of bold flavors and brewing techniques, Rich creates several new limited and seasonal recipes each year.

Rich’s formal education includes certification: from MBAA in Brewing and Malting Science from the University of Wisconsin-Madison; graduation from University of California-Davis’s Professional Brewing and Fermentation Science Program; certification from the American Brewers Guild Intensive Craft Brewing Science and Engineering Program; and a working apprenticeship with a brewery in Germany followed by second apprenticeship at a brewery in Switzerland and a cask-conditioning course offered in British Columbia.