Familiarity with these acronyms will help you better appreciate and understand basic beer flavors and styles.

Beer typically falls in the range of 4–6% Alcohol By Volume (ABV). ABV is the standard measurement of alcohol content and it is the by-product created by fermentation. Fermentation occurs when yeast breaks down sugars, and brewers can control the final alcohol level by extending or shortening the fermentation time.

International Bittering Units (IBU) are a measure of the bitterness in beer. This bitter flavor is imparted by the use of hops in the brewing process. Roughly speaking, the higher the IBU number, the more bitter you can expect the beer to be.

One important thing to note about IBU and bitterness is that higher IBU does not always equate to a higher-perceived bitterness. Hop bitterness is relative to the sweetness and quantity of the malt sugars in a beer. Here’s where that Original Gravity (OG) number comes into play.

Simply put, OG is a measure of the sugary-sweetness content of the beer, and it is imparted by malt and grain ingredients. This is important because the more malt sugars your beer has, the more hop bitterness is need to balance the sweetness of the malt.

For example, in lighter pale ales, the malt profile is subdued; so it’s much easier to detect hop bitterness over the flavor of the malt. Meanwhile in big, thick stouts, the hop profile has to contend with the strong, deep flavors of the roasted dark malts and the sweetness of the beer itself. Many porters and stouts have relatively high IBU (50–60), but the hop flavor is really not as apparent as it would be in a beer made with lighter malts like a pale ale or lager with the same IBU number. The flavor is a result of the ratio.

In summary, IBU does not always translate to a “more equals more” situation—you have to keep the beer style and ingredients in mind. But in general, thinking in terms of IBU and OG is a great way to “visualize” a beer before you drink it. This is what makes tasting different beers fun for the consumer. And it’s the process of playing with that ratio that makes working at Empyrean Brewing Co. so much fun. 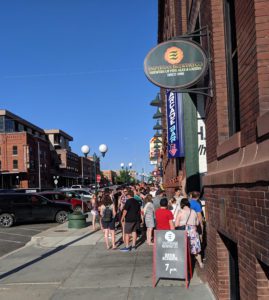